I was born blind; it took me bumping into my building blocks for my parents to realize that. All children are actually blind for the first months of life, I just never gained my vision. My blindness was the result of being a Rubella baby - one of many during the year of 1962. Operations were done on my eyes by the acclaimed surgeon, Dr. Shea, who recovered sight in my left eye, although I was left with a modest vision measuring at 20/35.

My childhood was spent looking through a very thick pair of glasses. I would knock over cups of milk and tried to grab things that were out of arm's length. With only one functioning eye, depth perception was difficult. Most children didn't understand the thick glasses and gave me the nickname of Four Eyes. I was also granted the rare name of Coke Bottle Eyes.

My limited vision allowed me to become very attuned to detail. The doctors and my parents were amazed. I could draw very complicated pictures, usually of an architectural nature. Fantasies of large cities with monorails and tree-lined pathways for pedestrians were meticulously illustrated. I even created an amusement park modeled after the newly built Walt Disney World -- mine of course was called the Wacky World of Weasel ... Weasel being my nickname through my tweens.

By my 16th birthday I was wearing contact lenses, which was good for my self-image. With no more thick glasses I looked like everyone else. Additionally I could see more like the common folk. All of my life I had worn glasses that magnified everything in my visual path. But now objects were scaled to their actual size, which was a lot smaller than I was used to. Everything was small, pizzas, doorways, trees, road signs, the world. I could still see detail -- it just was not magnified. Also my peripheral vision increased twofold and I was able to drive. Without contacts, driving would never have been possible due to my limited field of vision. What is seen normally by most people would be cut out of my sight when looking through the glasses. Removing the glasses gave me freedoms and driving was definitely one of them. I could go anywhere at anytime just as any person who can drive.

During all of these years my vision had remained stable and my surgery in my childhood was deemed an absolute success. Then at the age of 21, for no apparent reason, I developed glaucoma. This had always been a possibility the doctors said, and now it was reality. My vision over the next ten years remained stable while I used a myriad of medications to control the pressure. My life was relatively normal -- I went to college, held some jobs, commuted, moved out of the family house, dated several women, I basically became an adult. The pressure fluctuated, but never got out of control.

What is pressure anyway? Funny, you don't feel it. The doctors measure it, everyone has it -- it's just that some pressures are higher than others. Some people can withstand the levels that could easily make me go blind. Typically, a person will have a pressure level below twenty. I came in at around twenty-five and the roller coaster ride of numbers no lower than twenty began.

It was not until after I had returned from my walk across America that the real problems began. I had become a poor patient. The medications had been giving me all kinds of side effects that were wearing me out. There were stomachaches, headaches, fatigue, impotence, and lousy vision among others. I was taking only one of the three medications prescribed for me. Timoptic did not give me side effects, but both Diamox sequels and Phospholine Iodine did. I believed I was invincible to the disease of glaucoma because I had not lost any vision yet. But, this was not actually the case. 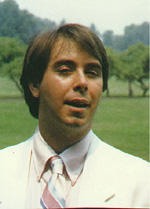 I remember when it all began. I was commuting nearly 600 miles a week to work as an administrator for a peace organization. I had been doing eye exercises from a book written in 1920's by Dr. Robert Bates. There was this shadow which would appear in the lower left corner of my visual field. I kept confusing it as an increase in my field of vision, but this was really a sign of visual decay.

It took me over one-and-a-half years to go see my ophthalmologist, during which I had lost at least 5% of my visual field. In December of 1992, my doctor recommended eye surgery. I backed away, because I felt the risks were high. The surgery was successful in 95% of the cases. My case was difficult, making the risks higher. Simply put, I did not like the odds.

It was becoming increasingly dangerous for me to drive at night. I would put my hand up to block the lights of oncoming cars and drove very slowly in the rain. A friend caught a ride from me one night and after witnessing my uncertain driving he commented that he would drive me home. Instead of considering that I had a real problem, I kept blaming it on my contacts. My contacts would fog up very quickly, making my eyes tired. Reading became a chore -- and now I was back in college where I had to do a lot of reading.

I visited my doctor again, to find I had lost another 5% of my field. I was told not to drive at night anymore and they put me on Iopodine, a new medication. My pressure level during this period had risen to a high of 50. This was when it became apparent that the contacts were not to blame, rather the glaucoma had begun to take a toll on my vision. The odd thing about this eye disease is that it fools you into thinking that your vision is not actually decaying. Wrong, it is commonly slow and progressive, with the changes so subtle that you don't notice until it's too late.

It was May of 1993 and I made the absolute decision not to have eye surgery done. The risk was one in twenty that I could go completely blind. Yet, I could barely wear my contact lenses anymore because my eyes would fatigue very quickly. No sooner were they inserted then my vision would cloud up. But I could not drive without contacts because my field would be too restricted with glasses.

My world of travel shrunk quickly to my regional area. I would only drive roads that I had driven frequently. The rationale was this: because I had lived in my hometown most of my life, I knew the roads very well. Basically, I had them memorized. Occasionally I would still drive at night in order to get out of the house. I would use major roads that had a lot of lighting. Lights guided me, though there were always patches that were not well-lit. Driving those areas was tricky. I would have to reduce my speed dramatically and use all of my strength to see what was going on. The most important trick for night driving was to follow a car's tail-lights. Their lights became my guide around bends and allowed me to drive at more normal speeds. I would even speed up just to catch up to another car.

The next year or so was spent with slowly decaying vision. By January of 1994 images of all kinds would appear before my eyes, making it impossible to make heads or tails of the world at night. The phantoms included jumping shadows, amoeba-like moving green and red objects, and just shapes that were not what I thought they were. During my last year at college I lived just a mile from campus. I would drive the same route and did not drive at night. I began to rely on friends to fetch me to do things.

Daytime driving was certainly no pleasure at this point, either. But, I kept driving. I had to be very focused when I was out on the road; traffic lights were difficult to see. A few choice roads were all I would drive. Every traffic light was in my mind, and I would slow down until I could determine whether they were green. Cars ahead of me became a better guide to which way the traffic was going. If the car was stopping so would I. Also, if cars were crossing the road, it seemed evident that I would need to stop, regardless of the actual traffic signals color.

I knew I was not going to be able to drive soon. I arranged to move into the center of my hometown just after I graduated college. I got a job working with a company that was on a bus line. I only drove to the market now. In September of 1994 I sold my car, and stopped driving.

There are two crucial elements to a narrow visual field:
1) The speed in which you can see everything
2) The overall clarity of one's vision.
With a narrow field you see as if you were looking through binoculars. In order to get the whole picture, you have to do a lot of eye movement -- then calculate what it all means. There is a lot of room for error.

Also, glaucoma creates a cloudy halo around the edges of the visual field. This causes the center vision not to focus as easily because of the edge-noise. It is similar to looking through a mild steam bath. But, it always remains foggy.

When my vision began decaying, I kept thinking that the cloudiness was related to my contact lenses. To understand this more clearly, the glasses limited my visual field. With the limited field, I didn't notice the foggy edges. Contacts, with their wider field of vision, allowed me to see this distortion.

In my final year of driving, I had a couple of close calls with the police, or almost-accidents -- yet, nothing really out of the ordinary. People who cut me off or would go through traffic lights accounted for these close calls. A cop pulled me over once for speeding and he shocked me when he told me how fast I was driving... I could not read the speedometer, so I didn't know!

Even with my limited vision, I still remain acutely observant -- and I think that's what allows me to continue riding a bike. While just out surgery and legally blind, I guided a friend out of Manhattan. Memory is one of the keys to vision -- and I happen to know the city fairly well. Also, I am the one who noticed the lights are left on or that one of the headlights is out before the driver even notices.

Today I do most of my work with computers and via phone. While the medical community does not yet have an actual cure for glaucoma they keep seeking one. The future may see eye transplants or possibly eye-cell re-growth. Until then I enjoy what vision I have left.

I am fortunate to live in a world of technology. I make heavy use of a text to speech reader to compose and read email messages, surf the internet, and magnify my PC screen. GPS technology provides audible cues to location while riding the city bus, and discriptive audio can be arranged at movie theaters. While technology can not replace eyesight, it has come a long way to help the blind become more independent.