St. Louis offered me great experiences. First were the botanical gardens which had an entire rainforest section. Meanwhile, down in South America, U.S. companies are profiting from the destruction of these forests to turn the land into a grazing ground for livestock. Yet it takes 20 times the amount of land to feed one meat-eating person versus a vegetarian. This double edge sword of waste amazes me.

Secondly, I visited with an old family friend who works for one of the larger chemical companies in the nation. The strong differences of opinion were evident during my visit. He believed that any chemical is natural, because to be created, it first had to come from the earth. Though it is not a natural compound and often very toxic to the planet, my friend still called it natural. He didn't see chemical destructive power as anything truly dangerous, simply he felt that it could be controlled by another compound to counteract its devastating effects.

Upon leaving St. Louis, I began to see the world in a new light I had never seen. We were walking to save the planet, yet there were such varying opinions on how to take care of the planet. It seemed unlikely that a consensus could ever be reached. Wars have been fought over differing opinions. Lands have been destroyed, races buried and yet we still disagree. There is a segment of our population who would much rather abuse the planet to benefit their comfort now and forsake future generations' pleasure of its splendor. 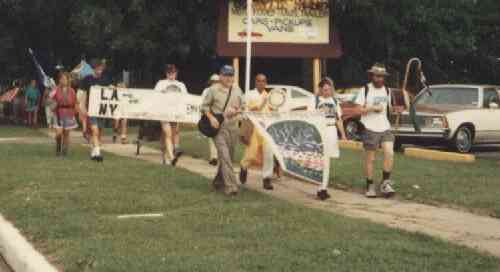 The plains of Illinois, Indiana and Ohio were upon us. The dense population of the east coast metropolis loomed just east of us. Town after town came and went as we came into Morgantown, West Virginia.

I have loved monorails since I was a kid. Everyone knows that Disney World has them, but few know that a few our cities built them as well. Morgantown was one of these cities. This monorail system reflected one of the most crafty uses of public transport I have ever seen. The university built the rail to take students between its campuses. Instead of making a simple loop, the cars had logic and would go directly where the person would specify. A personal taxi, yet a public transit system. Imagine if all towns and cities had this... we would not need all the roadways and cars we have today!

Leaving Morgantown was sad, it had been an exciting time for Land's Crossing who had played three gigs there. But we ventured out over the rolling hills of West Virginia and the western tip of Maryland and down alongside the Chesapeake into Washington, D.C.