We saw snow for the last time on May 1st, during our last night in Las Vegas, New Mexico. How odd that our natural perception is that New Mexico is warm most of the year, when in actuality portions of the state are at a very high altitude and are commonly cold this late in the season. Walking off the high plains down into Texas really maps the major climate differences between the regions. Within 20 miles we had descended thousands of feet into the rich heat of the Texas Panhandle.

It was in Amarillo where I experienced rubbing rust-colored mud over my naked body. The lot of us was bare to the world in a large pond -- each transforming into a new creature. The mud was warm and clung to the skin like clay. It became difficult to recognize each other after our heads were encased with Earth's highly malleable elements. If there was ever a moment during our journey to get close to the land, this was truly the one.

We began following the famous Route 66 east, which also paralleled the Santa Fe freight line. Some nights were spent within feet of the tracks. Through the silent night a rumble louder than ten thunderstorms would roll by us. A horn of piercing volume would blow as it passed and the ground shook from the thousands of tons weighing on it. Today's world survives on those tons of products which scream across the land. Yet, while we could produce most things locally, we do not.

This continent is vast and its size becomes very apparent crossing Kansas and Missouri. The horizon reaches far and the night sky begins to really feel like the inside of a globe. Roads carve through fields of crops which are planted in straight lines. The only thing that changes is the variety of garbage left behind by many people who look at the earth as their landfill for disposable containers, wrappers, cigarettes, and the like.

After a long bicycle ride into Kansas City to see Crosby, Stills, and Nash, I took a side trip to a national convention up in Milwaukee. I went back to New Jersey and onto State College, Pennsylvania to record with my friend David who was taking a leave from the walk to work on his first release. Greyhound brought me to Missouri outside of St. Louis by a few days' walk. 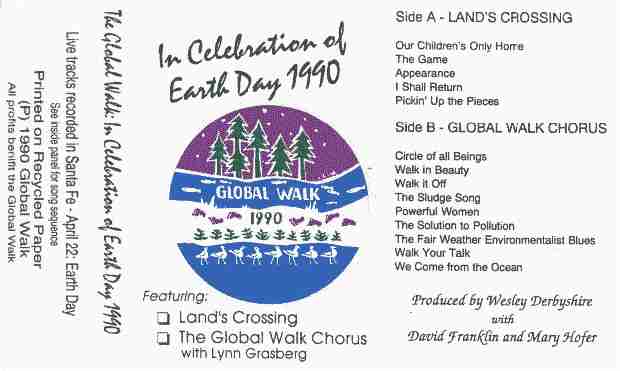