Flagstaff was our next major stop and by this point many new people had joined the walk and others had dropped out. I had played music for most of the journey, in particular with David, a guitarist, and a flautist named Mary. We formed a group called Land's Crossing. Both David and myself wrote songs with themes related to environmentalism and peace. We were performing at most of the Walk's public functions and began to arrange our own gigs.

While in Flagstaff I purchased a bicycle so I could get around with greater ease. As meditative as walking was for me, I always yearned for speed and excitement. The simplicity of walking showed me the vastness of our planet -- but I felt I wanted to explore more of its vastness in a shorter period of time. While walking I could see every blade of grass and each plant and animal along the way. On a bike I would miss this, but I wanted to take side trips and to spend more time in towns sharing my visions of an environmentally safe planet.

I left Flagstaff on my shiny new red bike and pedaled the miles out across the desert down into Navajo. This nation within the United States was the largest remaining Native American nation. It was at this point that my mind began to wonder and began to think about how we treated this race over the past centuries. It all correlated to how we treat the planet, too. Our lack of care for the living became very clear to me. A deep thought struck me -- while our forefathers set themselves free from a king, they also destroyed nations of peoples. Now, only a couple of centuries later, we are destroying the very land we slaughtered them for.

The Navajo people are poor but the most giving people I have ever met. In each community we walked through, feasts were cooked and stories were told. Our two week journey through their nation was a big eye-opener to how living in harmony with nature is possible.

The state of New Mexico is where the most destructive weapon on Earth was first tested. Yet, with all of our sophistication we have been unable to dispose of the waste from this weapon. Over the years, the stored radioactive waste has been destroying the land and will become more unstable through time. In a world where intelligence seems to be so abundant, we can't agree to disagree. We prefer to build weapons of mass destruction that will kill the very people they were designed to protect. The waste from these weapons is deadly, as is also true with the waste from nuclear power. 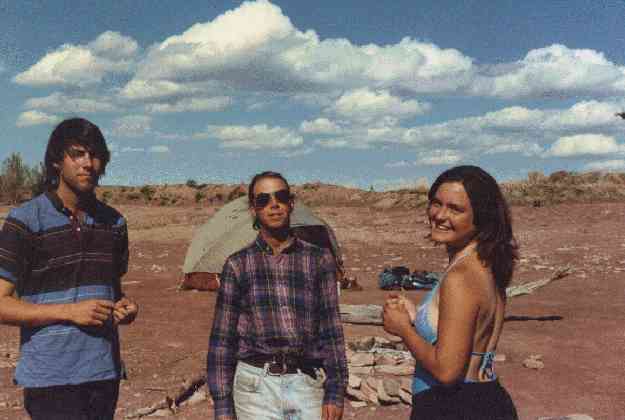 We arrived in Santa Fe on April 20th, just before Earth Day. The thoughts of the Earth's pending fate loomed in my mind. The Global Walk participated in a large Earth Day Festival where we shared our thoughts on these issues and, of course continued to demonstrate our methods for living more in harmony with the planet. Land's Crossing gave a wonderful performance which was recorded. The recording would be part of a fundraiser for the walk and also featured the Global Walk Chorus, which was made up of about 12 walkers.