It was August of 1989 when I first heard about the Walk. I was in my air-conditioned office in New York City when my friend Linda stopped by. She was the kind of woman who enjoyed the many experiences life could offer ... and the one that was coming she did not want to miss.

She told me a group of up to 500 people were going to walk from Los Angeles to New York to raise awareness about the environment. They would live in tents and create a mobile community as they journeyed from coast to coast. I was enthralled. The thought of living off the land -- experiencing the nation step by step -- was incredible to me.

After making the decision to join the Global Walk for a Livable World, I spent the next few months fundraising and taking short walks to exercise my body. I gave notice at my job and arranged for a one-way flight to Los Angeles. I bought a comfortable tent, sleeping bag and shoes and set out to the West Coast on Jan 13, 1990.

I arrived in Simi Valley, California that evening in what would be the only rainstorm I would see in that state. A freak storm was wetting the desert lands with gallons of water. After sleeping on a bus floor that night, I set up my home at the pre-walk camp, a place where we would be for two weeks. During these two weeks we got to know each other and discussed how we envisioned our community. Personalities often clashed during this period, everyone had their own vision. My vision was rapidly changing. The walk was not going to be as large as first described. We had around 120 people joining us at this point... a far cry from 500!

Upon completion of building our mobile kitchen and fitting the buses with toilets, office equipment, and baggage areas, we set out for our journey east. 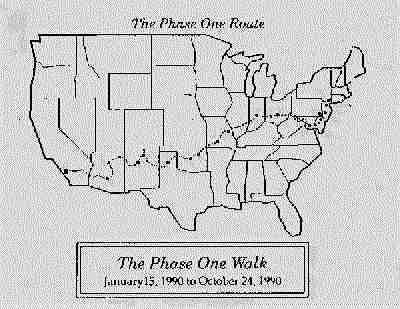 The walk began on February 1st at the shores of the Pacific Ocean in Santa Monica. There were over 3500 miles before us on this hot summer day. Our send-off ceremony featured talk and music about the very issue we were walking for. Casey Kasem, the voice of Scooby Dooby Doo and popular disk jockey, bid us farewell from the podium as the lot of us set out.

Over the next three weeks we trekked across some of the toughest terrain in America. The vast emptiness of the Mohavi Desert surrounded us for miles and days. Occasionally we would pass a small shack that many years ago was occupied by a homesteader, but literally the entire desert showed no signs of human life. The desert was quiet with the appearance of lifelessness. Humans are funny creatures, when we don't see the likes of ourselves, we assume that there is no life. The desert was filled with life though. Creepy crawlies roamed every which way. Snakes and coyotes could be found with a little looking. Plant life sprung up in every direction. In fact, the desert is very much alive, it just is difficult for humans to survive there.

We reached Phoenix on March 1st and were part of a large fair which featured exhibits about ecological issues. The Global Walk shared how the people of Earth could tread a little lighter. We exhibited recumbent bicycles and demonstrated both solar cooking and electrical panels. We offered insight on how cities of the future could be planned with the environment in mind by building housing and shopping in the same vicinity. Low-flow toilets were demonstrated and information on composting toilets was available. All the simple things we're accustomed to in life were given twists that could help our environment dramatically.

The Global Walk was a community that lived by demonstration. Our mobile office and kitchen were solar powered and one of our buses ran on methanol instead of gas. All of our toilets were low-flow and we used our recumbent bikes to move things around.